It should be no surprise to anyone that deciding where to live has changed a lot since the 1800s. It was during this time that the Midwest was populated by Native Americans and Fur traders looking to make their fortunes in the trade.

Alexander set out from Mendota in the fall of 1826. As an agent of the American Fur Company, Faribault was directed to establish a new trading post in the Cannon Valley area to trade with the Wahpekuta (Dakota). His first post was along the banks of Cannon Lake. The post moved to other locations over the next few years and in 1834, he moved his trading post near the confluence of the Straight and Cannon Rivers, laying the groundwork for what would become one of Minnesota’s most historic communities.

By 1844, Alexander began to expand his business interests to include land development. Serving as a territorial legislator and treaty translator, he saw opportunity in this fledgling state and began working on developing a town. In 1853 Faribault began construction on his framed house. The Alexander Faribault house was the first frame residence in Rice County and quite possibly in all of southern Minnesota. The house was built just two years before the town of Faribault was incorporated..

The overall cost during the time of construction for the house totaled $5,000 and was built in the style of Greek Revival.

The house itself served as much more than just living quarters for the town’s founder. It was also the first post office, first civic center, first hospital, and early polling place. Father Augustin Ravoux also performed one the community’s earliest religious services in the house as well.

Today the house serves as a reminder of the rich history and prosperity of Alexander Faribault and the town he created alongside his home. 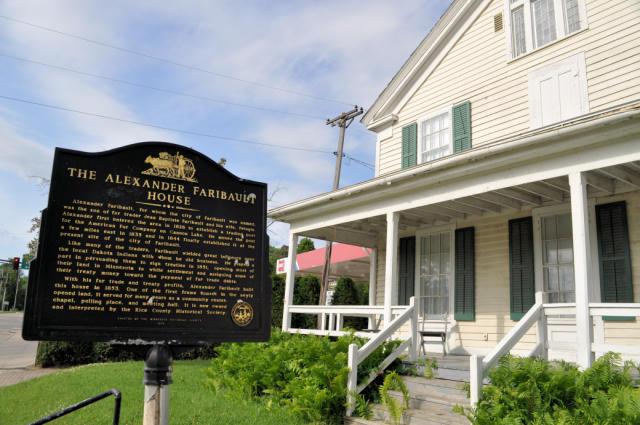 The Faribault Family only lived in the house for three years but the house remained a private dwelling until the depression. By the early 1930s, the house was showing serious signs of deterioration. In 1944 the Faribault Foundation, Inc. purchased the house for $1,376.65. They had hoped that the City of Faribault would take over the home to be used as part of the City Park Development Program. The City declined the offer of the house so the foundation then offered the house to the Rice County Historical Society, which was accepted.

It was formally transferred to RCHS in 1945, but it would be 8 years before the house was fully restored and opened to the public.

Once the committee charged with restoring the house began inspecting the building, they were shocked to find that it was in surprisingly good condition. Some of the immediate renovations included rebuilding the front porch, repairing the shutters and siding, and adding a concrete sidewalk.

Labor for the project came from the generosity of the Faribault community.   Volunteers  and members of the Historical Society lent a hand in the renovations. The workforce also included the entire class and its instructors of the industrial arts department at the Faribault High School.

Through their hard work, and $11,743 later, restoration to the house was completed to the point where the public was invited to view the repaired interior of the house in 1953, one hundred years after the building’s original construction. 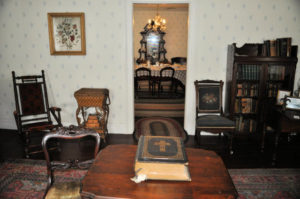 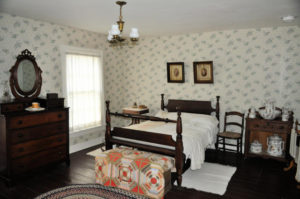 Located at 12 First Avenue N., the Alexander Fairbault House remains open to the public. It displays furniture, paintings, and artifacts belonging to the Faribault family as well as other early Rice County settlers.

Times to tour the house are available by appointment for groups of all ages and for individual tours. Open houses are held during Faribault Heritage Days and the first full weekend following Thanksgiving.

If you’d like to learn more about the Alexander Faribault House, you can visit the Rice County Historic Society’s website – www.rchistory.org/alexander-faribault-house/ 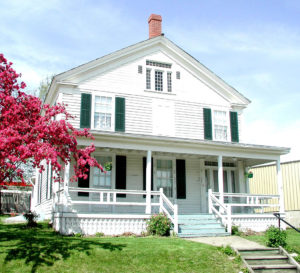